Switched on to work 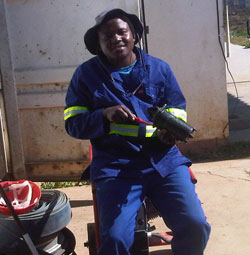 Mzwandile with the tools of his trade

Mzwandile Nxumalo matriculated at the South Coast Academy and then went on to register at the Esayidi FET College for an Electrical Engineering course.

After completing  his N5 in 2008, he remained unemployed for 4 years. In 2013 he finally found temporary work for a few months  with an Electrical Company. Luckily one of his former lecturers advised him to register with DreamWorker. A few weeks later Mzwandile was employed by Pondo Plant and Civils in Kokstad. He is loving his new job and cannot thank the DreamWorker Worklink team enough for getting him “switched on” at last!