“Brushing up” on his Merchandising Skills! 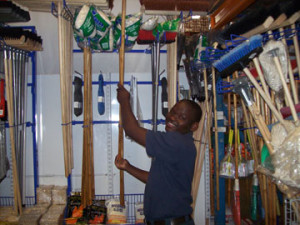 Richard Shonga matriculated in 2006 at Mangquzuka High School, in Oshabeni approximately 20 km from Port Shepstone, on the South Coast of KwaZulu Natal. He was employed during 2007and 2009 during which time he also managed to obtain his driver’s licence. When that initial employment contract expired he remained without work for the next four years, until a lady-friend informed him about the newly opened Worklink Centre in Port Shepstone.

Within weeks he was sent for an interview and succeeded in being appointed to a permanent position as a merchandiser.

Richard now works for Brushware CC, a Durban-based company. He is based in Port Shepstone on the South coast of KZN and is responsible for several branches, situated in Marburg and Manaba (both in Port Shepstone area) as well as those found in the towns of Harding, Izingolweni, Port Edward and Umtwalume. 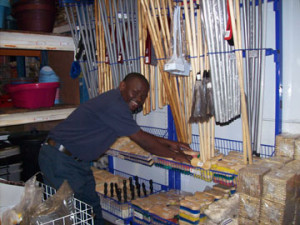 Richard is delighted to have found work after so long. “I really enjoy interacting with people from so many walks of life. Having regular work means that I can once again think about the things I want to achieve for myself in life. I urge the people of Port Shepstone to keep on hoping and keep on having faith that they will find work!”